Masanobu Fukuoka – A simple farmer still ahead of his time. 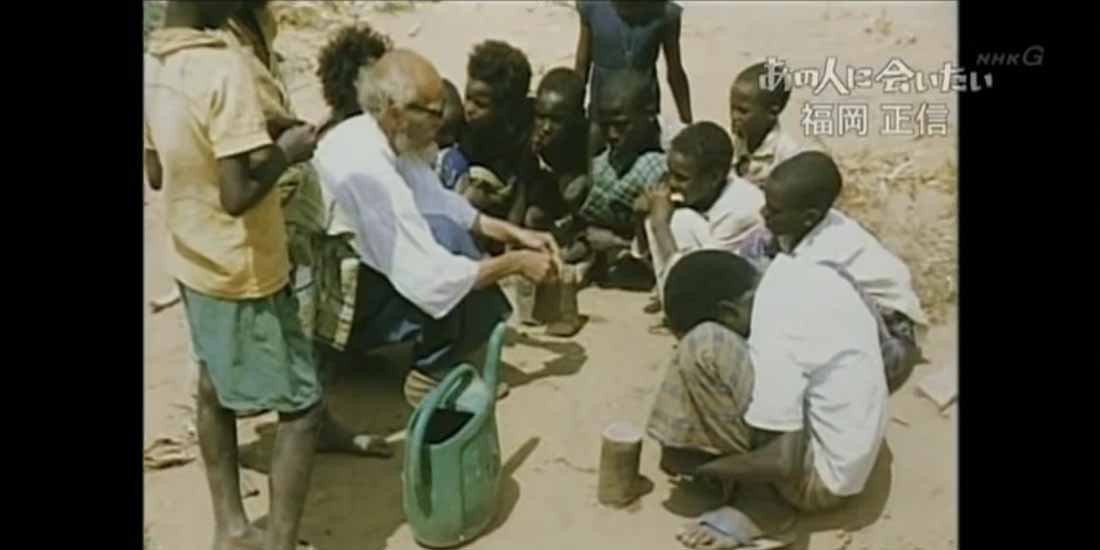 In June of 1992, I embarked on a mission to meet the acclaimed Masanobu Fukuoka at his home in Japan. As I had landed in Japan for work unrelated to Mr. Fukuoka’s lifelong dedication to natural farming, I hadn’t yet established any preliminary communications or even introductions with Mr. Fukuoka prior to landing at Narita airport. This was before the convenience of email and google searches to get contact information.

Nihon C.I. was the name of the macrobiotic foundation at that time in Tokyo and it was the vibrant hub for all things macrobiotic, organic, and otherwise related. The Nihon C.I. staff would be my liaison to contact this great author and scientist whose award-winning books had already been regarded as the bible for minimalist-style farming in its practical approach to resolving food shortages naturally and sustainably.

My Japanese was at a beginner level, so a Nihon CI staff person assisted me. They’d recently covered his work in their macrobiotic magazine. My translator understood my goal was to set up a visit at his house and small farm in Shikoku, at Mr. Fukuoka’s convenience. Shikoku was a few hours by car from Tokyo — or an expensive bullet-train ticket with a connection.

Mr. Fukuoka’s daughter-in-law answered the phone and the requisite super-formal and polite niceties transpired over the course of the next minute from his relative to my translator. My translator paused and informed me that Mr. Fukuoka was not feeling well and was not receiving guests.

My impatient thought was “fine, pencil me in for next month as this has taken effort to get to this point.”

“Maybe later?” I coaxed as I pointed to the receiver my translator held. She resumed her polite dialogue another minute.

Without giving a glance toward me she ended the call with an unassuming smile.

The answer (that may have been too subtle for me to understand) she gave me was that she was sorry it could not be arranged. A few days later I found out from some Americans that he didn’t usually receive guests, even from his fellow countrymen who wanted to write articles about his studies and lifestyle. Maybe this was misinformation, but my quest was quieted by the news that he seemed to be introverted or at least very private.

Prior to making that single phone call from Tokyo, one of the staff told me his neighbors weren’t ready for his “vision.” She was more specific in telling me that she heard his plot tended to look very unkempt.

Digging further into his reputation in Tokyo as months passed, I personally believed he would have been well-suited to live and farm in the middle of acreage owned and supported by a university. Certainly he wouldn’t have been criticized for creating the balanced plant utopia he worked so hard to cultivate had he lived among neighbors who were more progressive.

Looking at the bigger picture of the industry in Japan and overseas, he was also too advanced for his own country’s idea of what is efficient. Encapsulating seeds in mud as part of his no-till strategy was and still is not congruent with big-farm strategy. Small farms, however, have often embraced his daoist style and findings of complementary crops (polyculture). The obvious question to raise in terms of efficiency is how is it that an award-winning author is only regarded as a theoretician or even just impractical — when he is actually a biological scientist who explicitly demonstrates how to maximize space for production. The fact that this riddle even exists seems odd to me.

Rewind the clock to the US Green Revolution of the 1970s when small farms were getting choked out. Big farms were spraying chemicals as if it were the days of 1916 trench warfare all over again.

And freeze frame right there.

The word “efficiency,” it seems, needs to be scrutinized more closely. Maybe creating a better distinction between long-term and short-term efficiency is the way to go when it comes to canonizing Fukuoka into history books. His vision was not petty. He was not materialistic. His titles depicted his humility and long-range thinking. His textbook-style attention to detail in polyculture debunks any attempt to say his methods aren’t scientifically valid.

A few questions to further explore his place in history and also his very own notion that he failed to bring his dream to scale might be:

Just how sustainable, efficient and productive is “unnatural” farming in its massive scale?

Who are the stakeholders of the big-farm lobbyists in D.C.?

And how do their interests affect those in foreign countries in a ripple-down effect?

Granted, his style of farming did yield a relative output loss initially, but his small farm supplied a staggeringly high output both in seeds (oftentimes donated to poorer regions) as well as crops. And this output question does not even address his presentations on desertification being nearly all attributed to humans.

On a micro level, how are people who may be concerned about pruned and groomed properties concerned about their property values. Did we pass through (or end) an era of “higher frequency” civilizations eons ago when sustainable function superseded the “lower frequency” fixation with “acceptable appearance”––the large inexpensive bouquet of commercially grown flowers vs. one wild one as a gift.

Very few people would disagree that Fukuoka was ever-concerned with acting in accordance with the laws of the universe in farming. His revolution is preserved and mapped out very well, although adaptation must be made for different regions he never visited. He left no stone unturned in his teachings on leveraging nature in a manner which could even be called symbiotic.

But still today in terms of large-scale application, which was his dream, his teachings are merely an idea.

…or an appointment whose time has not yet come.

Although I did not get to meet and interview him, please enjoy the below video.

Cecilia Macaulay did get an interview at an event at Waseda University, in 1995.

about healthy land care sustainable living what is it